Each new account starts with the same set of cards.

• Truck - Place Val & Earl’s truck! Use this to traverse the map quickly, in a group of 3.
• Market - Place Walter’s iconic market building. Can be used to place new meeples in. Also has basic defence against Graboid attacks.
• Old Revolver - A basic weapon, can be given to a meeple.
• Soda Machine - Distraction specific to the market, will attract every Graboid towards the market for 3 turns when played. Use this if the Graboids are on your trail!
• Rhonda Lebeck - A leader meeple, with a hat! Can be used as a good distraction due to her extra hitpoint.
• Walter Chang - A meeple. Hatless :(

Your deck can be expanded by earning XP, or by buying cards in the Card Market on the main menu. 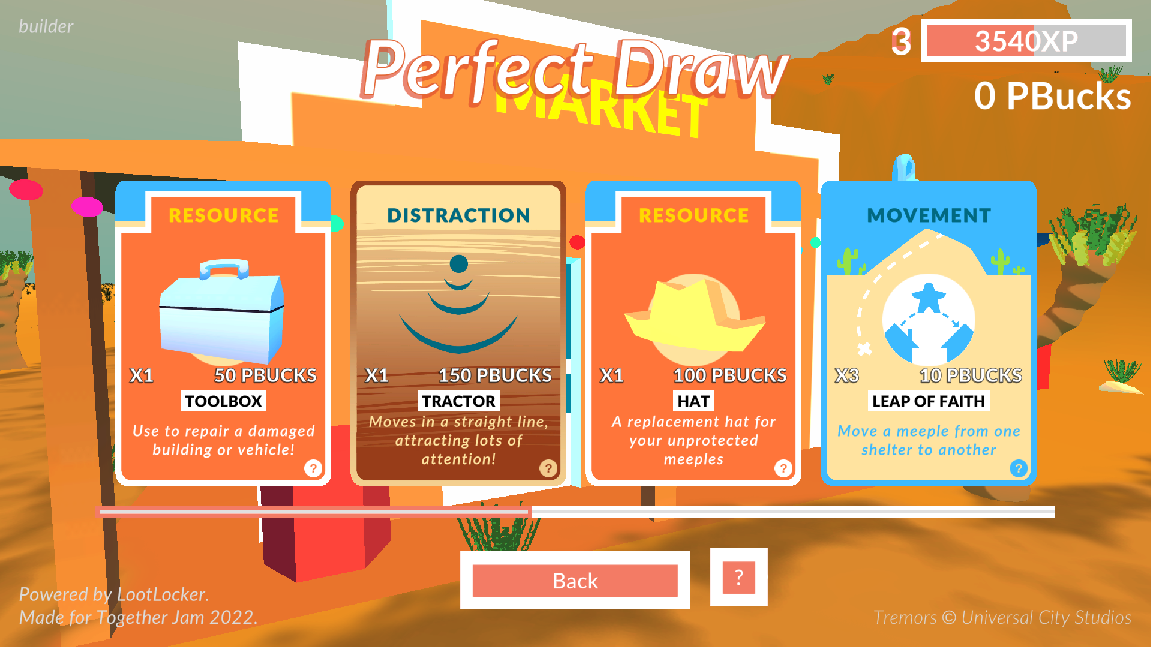 Money can be used to buy cards. Every account starts with a gift of 50 PBucks! Head to the Card Market before your first run and choose something to help you succeed.

We recommend either Prepper Bunker or Toolbox first, both cost 50 PBucks exactly.

Prepper Bunker - An extra building card, which will help defend your meeple and add another spot for you to place meeples onto the grid.

Toolbox - Repairs damaged buildings or broken vehicles. Very useful for its ability to repair your truck if a Graboid starts munching on it!

These are your characters! Protect them!

You start with two of them; Val & Earl!

Meeples with a hat have an extra hitpoint (i.e. they can survive being munched by a Graboid once) - some meeple spawn with hats, some have hats thrust upon them (by you. you can use the Hat card to give hatless meeple a hat.)

Each Meeple can take one action per turn. For example:

Meeples can be equipped with weaponry in order to defend and attack. When a meeple has a weapon, it will automatically defend the tile/building/truck it is on. A meeple with a weapon can also move into a Graboid to instigate an attack!

This card always starts in your hand, and is extremely useful! Setting this down next to both Val & Earl is a great first move.

The truck can move 3 spaces each turn (as long as they have a driver). This movement does not consume the actions of the meeples within!

If a truck is attacked, any weapon-wielding meeple within will automatically defend it. Otherwise it will be broken.

If a truck is broken, all the meeple will spill out onto the ground! Broken trucks can be repaired with the Toolbox card. 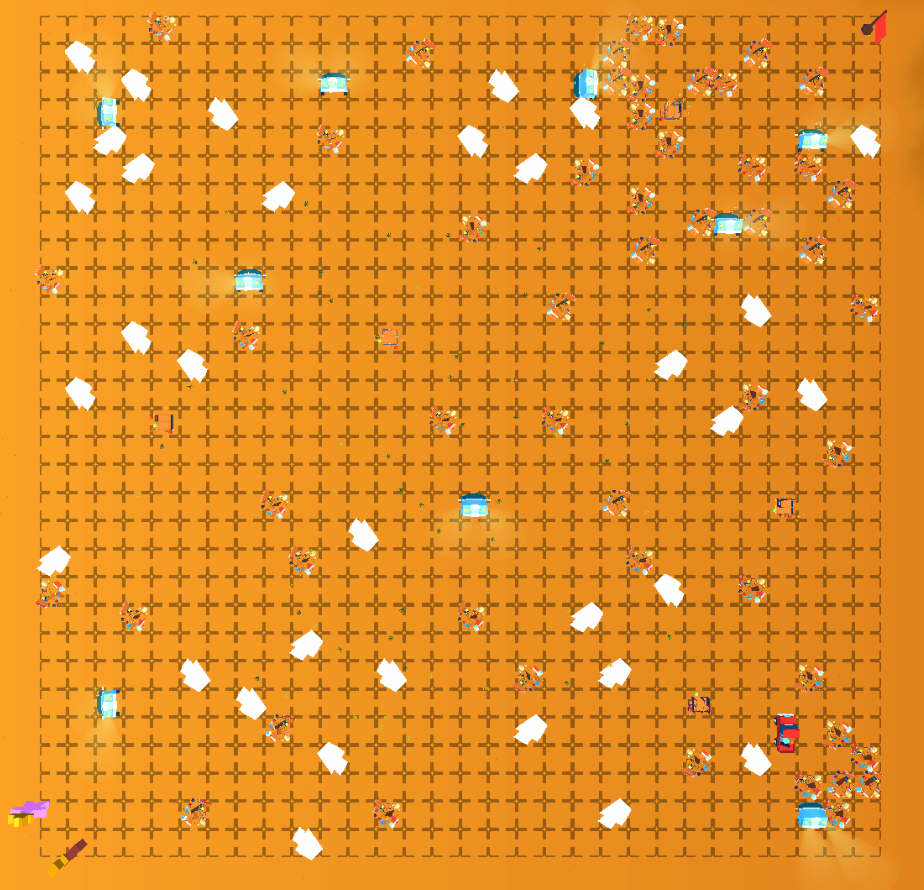 Your two meeple, Val & Earl, start in the bottom left of the map. Your goal is to get them and any other meeple to the Goal Flag in the top right.

Common locations on the map are; Ruins, Debris, & Boulders.

The Red Truck (more details below) is in the bottom right of the map.

Each quadrant of the map starts with a Graboid patrolling it. Once you start making vibrations, they’ll quickly come your way.

The Mountain Trail Flag is your goal! The mountain is pure granite, and the Graboids can’t dig through it!

If your meeple can make it there, they’ll be saved. You gain + 50 PBucks for every meeple you save.

There are 14 ruins on the map. Each can be searched once by a meeple for a temporary card reward! These rewards can include Weapon, Resource, & Movement cards. You can spot them by their tell-tale sparkles!

Searching ruins is integral to victory, especially when using the Starter Deck.

Debris is impassable and useless! That sucks!

The map is full of debris, especially near the mountain. It’s also left behind when searching ruins or when buildings are destroyed.

Boulders are completely safe from Graboids! Up to 4 meeple can stand on a boulder at once. Additionally, moving on to a boulder causes no ground vibrations.

This truck has been left out in the middle of nowhere!

It’ll serve you well if you can reach it, with more movement than Val & Earl’s truck!

There are two types of monsters; Graboids, & Snakes

Graboids can spawn Snakes when close to vibration sources. Each Graboid will deploy 3 Snakes at your meeple before the Graboid itself will appear!

Graboids are the stronger of the two, and can burst through the ground to eat your meeple/buildings/vehicles! Each attack does 1 hitpoint of damage.

Snakes are short range monsters which can immobilise your meeple! They cannot deal damage, but will send out signals to their parent Graboid about meeple locations :)

You have 3 types of weapon in your anti-graboid arsenal!

Good for killing Snakes, not much use at killing Graboids - but can scare them off in a pinch!

Burt’s prized treasure, how’d you get your grubby mitts on it?

Can kill a Graboid in one shot! But only has one shot to shoot.

Does medium damage. Paired with both shots from the Old Revolver, could take down a full grown Graboid.

We hope this helps get you started!

Also check out the in-game references through the pause menu or from the Messages menu.

And see a full playthrough here;